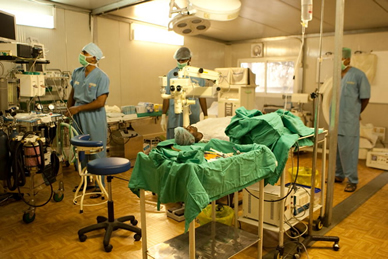 Surgery is the key treatment of cancer

However, there is no point in curative surgery, if the cancer cannot be removed in its entirety. If the disease diffuses with multiple and major metastases or if the primary tumor invades vital organs, surgery no longer makes sense.

Before removing the tumor and the surrounding tissues, the surgeon has to estimate the potential damages. After a lung resection for lung cancer, the physician will perform respiratory tests to verify that the patient can survive with the remaining lung. After surgery, analysis of the surgical specimen allows verifying that the entire tumor has been excised. Ink allows visualization of the boundaries of the resection under the microscope after brushing of the surgical specimen. To be sure the resection is complete, the pathologist will take great care to check that the surgical limits (which he recognizes because they are inked) are at a sufficient distance from the edges of the cancer. He will also check for the presence of invasion of the blood vessels and lymph node. This will help decide for chemotherapy.

If the cancer can be removed entirety, the patient has a chance of survival. But the surgeon is never sure that there are no small metastases invisible to the best radiologist. The patient will therefore be examined regularly to detect the appearance of metastases or a local relapse.

There are cases where the tumor cannot be excised without major damage. For example, the tumor compresses an artery that cannot be removed. In such cases, the oncologist uses radiation therapy. This treatment dates from the end of the 19th century. It consists of irradiating the tissues with a beam of X-rays. The cancer will respond by reduction in size or it may even disappear. The surgeon can then operate and remove a smaller area without damaging the artery. 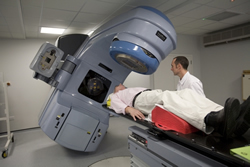 The treatment of breast cancer very often requires radiation therapy. The surgeon wants to both limit the size of the excision and simultaneously limit the risk of relapse. He then resorts to lumpectomy (limited surgery). Radiation therapy will sterilize any remaining tumor cells that may be present in the breast. Hence, mastectomy will be avoided. As a rough estimation, out of 100 cancer patients who are cured, surgery is responsible for 90% of success, radiotherapy for 8% and chemotherapy for the remaining 2%. This shows the importance of surgery in the treatment of cancer and the low impact of chemotherapy.

Much more complicated is the treatment of metastatic cancer. In majority of lung or pancreatic cancers, where diagnosis reveals extensive metastases. In such cases surgery does not make sense, because cancer and its extensions cannot be removed in their entirety.

Some metastatic cancers grow slowly. Some breast cancers that have spread to the bone may survive for many years, even without treatment. A minority of kidney cancers are also indolent in progress. The patient can survive for years even without treatment. But much more frequently, the prognosis is dire. Today, the average survival of lung or pancreatic cancer does not exceed six months.

In the above cases, the prognosis of patients is not good, because the disease has spread. Over 75% of lung cancer or pancreatic cancer are metastatic at time of diagnosis. Conventional treatment is not very effective. Chemotherapy or even today immunotherapy can halt the progression of the disease for a limited time.

The response to chemotherapy takes time to be assessed. It is only after a few weeks, that the clinical examination will visualize a decrease in the diameter of the mass. This can be confirmed by an X-ray examination or by a scintigraphy with radioactive glucose (PET scan). The tumor response can also be analyzed by monitoring tumor markers. Cancer secretes a quantity of proteins that can be measured in the blood. The best known of these markers is the Prostatic Specific Antigen (PSA), the elevation of which is a sign of prostate cancer. If the treatment is effective, the level of markers will decrease rapidly.

But even if there is a transient response to chemotherapy, the tumor masses will quickly start to grow again. A second line of treatment usually fails. The tumor grows more aggressively with an acceleration of the doubling rate. In such a case, the patient quickly dies. Even today, it has not been shown that chemotherapy has a major impact on life expectancy. However, notable exceptions are few pediatric cancer, Hodgkin’s disease, and cancer of the testis. Most trials show, at best, a difference of a few weeks, when chemotherapy is used.

There is a side effect of chemotherapy that is little talked about. During treatment, the cancer changes and becomes more and more aggressive. The tumor regresses for a while, but the recurrence of the tumor is much more aggressive than the original tumor. The cell mutates and the cancer stops responding to chemotherapy. In addition, cancer patients will not respond positively to other drugs of chemotherapy. The tumor may initially respond to the treatment protocol but after a limited period of time, it will not respond to the first line of treatment and to any treatment. At this stage, the disease has turned into a more aggressive form of cancer.

Chemotherapy is a violent treatment. Some tumors respond and the patient feels better because the cancer has regressed. The problem is that after a sensitivity phase, the tumor will be much more aggressive.

Any clinician knows that the likelihood of a response to chemotherapy decreases over time. The response rate to first-line chemotherapy in lung cancer is about 30%. This means that only a third of the patients treated will see their tumor regress. And the response to treatment will last for a few weeks or months. But chemotherapy, gradually, will lose its efficacy and the tumor will start growing even more quickly. The oncologist will then prescribe another regimen of chemotherapy consisting of different drugs. This is commonly called the second-line chemotherapy, but the response rate drops to less than 10%.At this stage, the tumor becomes more aggressive and will be fatal quickly. Therein lies a key problem in oncology. The benefit of chemotherapy is only transient. Transformation of the initial tumor into a more aggressive tumor compensates most of the initial benefit gained from chemotherapy. 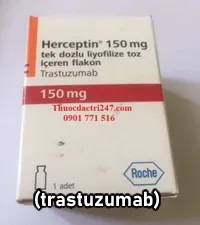 For both to improve patient survival rates and to open up new markets, the pharmaceutical industry has bet on targeted therapies. Molecular analysis of the tumor finds an activated metabolic pathway that is responsible for the cell proliferation. The cancer cell opens its gates to a growth factor. An inhibitor blocks this pathway. That is the story of the drug called Herceptin. In 1984, American researchers discovered that some cells of breast cancer express the “neu” gene that code for the c-erb2 protein. This protein is a receptor for a growth factor that will stimulate the proliferation of the cancer cell. The first major American Biotech Company, Genentech, targeted this c-erb2 protein to slow down cancer growth. Eight years later in 1992, Genentech began the first clinical trial. Herceptin was fast-tracked by the FDA and gained approval in September 1998. The drug became a blockbuster earning billions of dollars.

Prescribed alone, Herceptin has no effect on cancer growth. It has to be combined with chemotherapy or hormone blockers for the treatment of metastatic breast cancer. Roche, the Swiss pharmaceutical company, who has since bought Genentech, claims that it increases survival by a few weeks.

In these trials, Herceptin also increased the risk of heart problems, including heart failure and left ventricular ejection fraction decline. The heart cells express c-erb2 that they need for its good functioning. Despite its widespread prescription in early stage as well as in advanced cases, the number of deaths of breast cancer has failed to decline rapidly.

A parallel approach has been anti-cancer immunotherapy

Superficial bladder cancer has long been treated by intravesical instillation of BCG, the Calmette and Guérin bacillus, a vaccine against tuberculosis. BCG is an irritant and instillation is painful. It is the irritation which controls the cancer growth. Injecting other abrasive agents such as intravesical chemotherapy is also effective in treating superficial bladder cancer. BCG has no efficacy against distant metastatic cancer. BCG is only effective because of its irritative action.

Since the 2000’s, new immunotherapies have been developed with a great deal of publicity. Monoclonal antibodies allow attacking diffuse tumors, through the stimulation and boosting of patient's white blood cells. These are new molecules and therefore easily patentable. (www.clo2.nl: read profitable!)

Some patients benefit from these treatments. The tumors regress for a time. The majority of patients suffer from severe side effects because white blood cells also attack healthy tissues. This promising approach is less revolutionary than it appears. The response rate appears to be of the same order of magnitude as that of old cytotoxic chemotherapy. The response to immunotherapy is only partial and transient.

Today, the work of the oncologist is mostly one of supportive care. The radiotherapy will calm the pain; the chemotherapy will improve the symptoms for a while. The morphine will alleviate the stabbing pain.

Unable to cure cancer, researchers have tried to prevent it. Multiple clinical trials involving hundred of thousands of patients have been performed to check the value of cancer prevention. They all have failed. Some trials have focused on physicians. They are well informed and eager to participate in trials. The aim is to divide volunteers into several completely comparable groups. One example, among many, concerns 14621 Finnish doctors that have been entered in a trial that lasted 8 years. These volunteers have been divided into several groups. The first group received a placebo, the second vitamin E, while the third group received low doses of vitamin C. After eight years the incidence of cancer is the same in each group.

Other large trials have been carried out on a high-risk population such as workers exposed to asbestos. Asbestos is a flame retardant mineral that was used to prevent fire. It has been therefore widely used in the past for automobile brakes and in construction. Asbestos forms fiber-like particles and when inhaled, it will lodge in the lungs. The chronic irritation caused by asbestos is carcinogenic. These workers are therefore at high risk of developing lung cancer and mesothelioma (cancer of the pleura).

The physicians tested the preventive effect of beta-carotene and vitamin A. Here again they are comparing two groups of workers. These supplements do not decrease but, worse, increase the risk of lung cancer.

Other trials target women at high risk for breast cancer. The risk of breast cancer increases if there is a family history of breast cancer. A trial has been performed including 2394 women with one or more family members affected by breast cancer. They are divided into two groups. The first group of women receives an anti-estrogen that is supposed to inhibit the carcinogenic action of estrogens. The second group serves as a control because it received only a placebo. 70 months later, the number of breast cancer is the same in both groups.

Today the only action that is effective is the prevention of massive exposure to tobacco and other carcinogens. The rest is just guesswork.