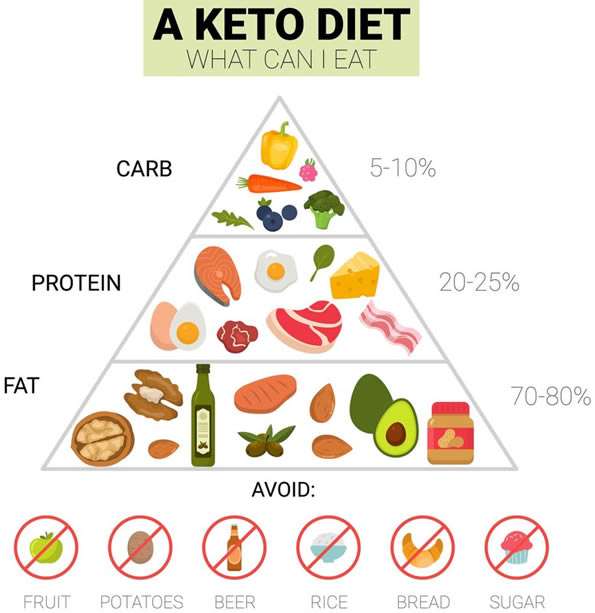 Today, carbohydrates represent 60% of calorie intake. We must return to more balanced diets. To reduce glucose intake, we must return to the diet of our grandparents. We have to compensate in fat and therefore increase our consumption of oil, butter, cheese and eggs …

There are many variations. The aim of some diets is simply at lowering sugar intake. We then speak of a diet depleted in carbohydrates. These are the “low -carb” diets. Other diets are more drastic. This is the case with the ketogenic diet. For the ketogenic diet, the share of carbohydrates in the diet is less than 10%. This causes the capture of lipids by the liver where they are broken down into smaller molecules called ketone bodies. These ketones give the high fat diet its name — the ketogenic diet. Ketone bodies have similar entropy content relative to glucose or fructose, but associated to a reduced number of carbon atoms (3-4 instead of 6). As they produce less entropy upon burning than sugars they constitute food of choice for the brain.

The undisputed success of the ketogenic diet has been demonstrated in the sports world. In 2020,the winner of the Tour de France is on a ketogenic diet. Likewise, US Army combat swimmers have banned sugar from combat rations and replaced it with fat. A 180-degree turn …

The fat-rich ketogenic diet has a long history in medicine. Hippocrates, the famous physician of Ancient Greece, cites its effectiveness in the treatment of epilepsy. There are serious forms of epilepsy that drugs cannot control.

In modern departments devoted to the treatment of epilepsy, there is a dietitian specializing in the high fat diet. There is a more than 50% chance that a ketogenic diet will space out, or even control, these attacks.

The ketogenic diet has been proposed in Alzheimer's disease. The Internet world is buzzing with testimonials suggesting the effectiveness of this diet. Videos are circulating showing patients with Alzheimer and Parkinson diseases before and after the ketogenic diet. The patients show themselves transformed. These amazing results are confirmed in mice with a decrease in the stigma of the disease.

A ketogenic diet reduces amyloid beta 40 and 42 in a mouse model of Alzheimer's disease.

But here again there is a complete lack of human clinical trials. The same applies to cancer and Alzheimer’s disease : testimonies by the hundreds and animal data suggesting the effectiveness but no clinical trials testing these therapeutic options.

Opponents of this medical approach retort the lack of randomized trials testing this regimen in cancer. They are right. These tests should still be organized. Institutions are notoriously cautious about change. Patients, on the other hand, encouraged by «hearsay», are simply struggling to survive.

What the oncologists observed on cancer patients, when they go on the ketogenic diet, is that they feel better. They increase their physical activity and seem to rejuvenate. Other physicians treat other conditions, such as epilepsy or Alzheimer's with the same ketogenic diet. Their opinions are unanimous. The diet appears to improve the quality of life. The patients are more dynamic and certainly happier despite their sickness. Everything happens as if they have regained energy.

Thousands of cancer patients have chosen the ketogenic diet. This diet appears to slow the progression of cancer. However, it does not heal it.

The cancer cell is a diseased cell. It cannot fully digest sugar because of the blockage of two enzymes: pyruvate kinase and pyruvate dehydrogenase. The cell captures glucose that it cannot digest, leading to a gigantic metabolic traffic jam. The residues of glucose that are not burned out will feed both the lactic acid secretion and the proliferation of the cells.
Patients are left on their own. The patients listen to the various testimonials on the Internet and navigate between books of dubious reliability. It is a long time since health authorities should have conducted rigorous testing. Patients pay the price.

The cancer cell is fragile. It can't burn sugar. It needs proteins and ketone bodies to survive. Like all living things, the tumor cell produces entropy. Let's go back to the history of the ketogenic diet.

In 1942, In Nazi Germany, Dr Wilhelm Brüning will be the first to introduce the ketogenic diet for cancer. It combines three daily insulin injections with a diet low in sugar but enriched in fat. At first, the tumors respond and decrease in size, but a few weeks later, tumor growth resumes. Insulin combined with decreased sugar intake had the consequence of dropping the synthesis of ketone bodies. The tumor regresses. However, this decreased synthesis in ketone bodies is short-lived, the concentration will increase and stimulate tumor growth.

Like glucose, glutamate or amino acids, ketone bodies are a fuel for the cancer cell.

Patients are left on their own. The patients listen to the various testimonials on the Internet and navigate between books of dubious reliability. It is a long time since health authorities should have conducted rigorous testing. Patients pay the price.

(Pedersen P, « Warburg, me and Hexokinase 2 : Multiple discoveries of key molecular events underlying one of cancers’ most common phenotypes, the “Warburg Effect”, i.e., elevated glycolysis in the presence of oxygen », Journal of Bioenergetics and Biomembranes, 39(3), 2007, pp.211-222).

Maurice Israël, a famous French Biochemist, analyzed the different metabolic pathways of the normal and the cancer cell. The normal cell can burn sugar or fatty acids. To the opposite of normal cells, the cancer cells cannot burn glucose or lipids completely. The cancer cells survive burning ketone bodies. Ketone bodies are digested into Acetyl-CoA because of the presence of a protein: Succinyl CoA Transferase (SCOT). Inhibiting SCOT, will prevent the use of ketone bodies by the tumor. Tumor will be deficient in Acetyl-CoA. As the tumor cell cannot burn glucose and lipids, it should die.There are old molecules, such as Pimozide and Lithostat, which can block that pathway.

Lithostat is a drug prescribed for the prevention of kidney stones, which may block the flow of urine. Since then, the urologists can destroy these stones by ultrasound. The prescription of the Lithostat has almost disappeared. Pimozide, also an old molecule, has been prescribed in psychiatry. In contrast with Lithostat, Pimozide is still in use today. Lithostat or Pimozide have an inhibitory action on SCOT and should prevent the tumor from burning ketones and amino acids. There are no data on the efficacy of Lithostat on cancer cells but multiple papers on the efficacy of Pimozide on cancer cells are available. Furthermore, it appears that patient treated by Pimozide for psychiatric illnesses are less likely to develop cancer.

Elmaci, I., Altinoz, M. A. (2018). Targeting the cellular schizophrenia. Likely employment of the antipsychotic agent pimozide in treatment of refractory cancers and glioblastoma. Critical reviews in oncology/hematology, 128, 96-109.

Inhibition of SCOT is a major therapeutic target. We hope that the pharmaceutical industry will take an interest in it and develop effective drugs.